Kadampa Buddhism is a Mahayana Buddhist school founded by the great Indian Buddhist Master, Atisha (AD 982-1054). His followers are known as “Kadampas.” “Ka” refers to Buddha’s teachings, and “dam” to Atisha’s special Lamrim instructions known as “the stages of the path to enlightenment.” Kadampas are practitioners who regard Buddha’s teachings as personal instructions and put them into practice by following the instructions of Lamrim.

By integrating their knowledge of all Buddha’s teachings into their practice of Lamrim, and by integrating this into their everyday lives, Kadampa Buddhists are encouraged to use Buddha’s teachings as practical methods for transforming daily activities into the path to enlightenment. "It is said that the unmistaken dharma is Mahamudra, Lamrim, or stages of the path, and Lojong, or training the mind. Therefore we should put great effort into practicing these instructions... as they are the very essence of Buddhadharma."
- Ven Geshe Kelsang Gyatso Rinpoche from "The Oral Instructions of Mahamudra"
FIND THE RIGHT CLASSES FOR YOU

Buddha Shakyamuni
The founder of Buddhism, who gave 84,000 teachings on compassion, wisdom and concentration.

Atisha
The founder of Kadam Dharma, who spread pure Dharma to Tibet for the first time through Lamrim.

Je Tsongkhapa
The founder of New Kadampa Dharma, who unified the meanings of Lamrim, Lojong and Tantra.

The Kadampa lineage bequeathed by Atisha was passed down through a succession of great Kadampa Teachers, among them Dromtönpa, Geshe Potowa, Geshe Sharawa, and Geshe Chekhawa.

These precious Teachers were not only great scholars but also spiritual practitioners of immense purity and sincerity. They placed particular emphasis on the practice of Training the Mind (Lojong), by which all our daily life experiences - especially all our problems, suffering, and difficulties - can be transformed into the spiritual path.

​The Kadampa lineage passed from generation to generation until the fourteenth century, when it reached the great Buddhist Master Je Tsongkhapa. Je Tsongkhapa clarified all the teachings of Kadam Dharma and made them very accessible to the people of that time. In particular, he showed how to combine Lamrim and Lojong with Mahamudra Tantra in a unified daily practice. 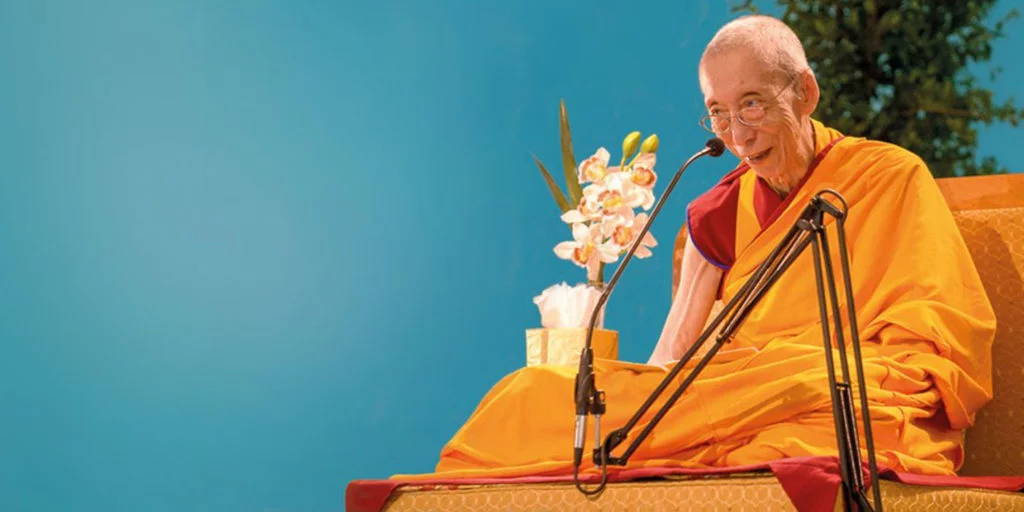 The New Kadampa lineage founded by Je Tsongkhapa flourished for hundreds of years, down to the present day. In recent years, it has been promoted widely throughout the world by the contemporary Buddhist Master Venerable Geshe Kelsang Gyatso Rinpoche.

Through founding the New Kadampa Tradition – International Kadampa Buddhist Union, Venerable Geshe-la has created a truly global infrastructure whose goal is to preserve and promote Kadampa Buddhism for many generations to come.

In general, all Buddha's teachings, the Dharma, are very precious, but Kadam Dharma or Lamrim is a very special Buddhadharma that is suitable for everyone without exception. The great Master Dromtonpa siad, "Kadam Dharma is like a mala made of gold." Just as everyone, even those who do not use a mala (or prayer beads), would be happy to accept gift of a gold mala because it is made of gold, in a similar way, everyone, even non-Buddhists, can receive benefit from Kadam Dharma. This is because there is no difference between Kadam Dharma and people's everyday experiences.